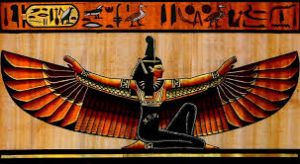 Maat or Ma’at (Egyptian mꜣꜥt /ˈmuʀʕat/)[1] refers to the ancient Egyptian concepts of truth, balance, order, harmony, law, morality, and justice. Maat was also the goddess who personified these concepts, and regulated the stars, seasons, and the actions of mortals and the deities who had brought order from chaos at the moment of creation. Her ideological opposite was Isfet (Egyptian jzft), meaning injustice, chaos, violence or to do evil.

After her role in creation and continuously preventing the universe from returning to chaos, her primary role in ancient Egyptian religion dealt with the Weighing of the Heart that took place in the Duat.[5] Her feather was the measure that determined whether the souls (considered to reside in the heart) of the departed would reach the paradise of the afterlife successfully.

In ancient Egyptian mythology, the Duat is the underworld or the realm of the dead. It is the home of the god Osiris, Anubis, Thoth, Horus, Hathor, and Ma’at, and many  spirits controlled by them. Ra, the sun god, also travels through the Duat every night and battles the serpent monster

Maat represents the ethical and moral principle that every Egyptian citizen was expected to follow throughout their daily lives. They were expected to act with honor and truth in manners that involve family, the community, the nation, the environment, and the gods.

Maat as a principle was formed to meet the complex needs of the emergent Egyptian state that embraced diverse peoples with conflicting interests.The development of such rules sought to avert chaos and it became the basis of Egyptian law. From an early period the King would describe himself as the “Lord of Maat” who decreed with his mouth the Maat he conceived in his heart.

The significance of Maat developed to the point that it embraced all aspects of existence, including the basic equilibrium of the universe, the relationship between constituent parts, the cycle of the seasons, heavenly movements, religious observations and fair dealings, honesty and truthfulness in social interactions.

The ancient Egyptians had a deep conviction of an underlying holiness and unity within the universe. Cosmic harmony was achieved by correct public and ritual life. Any disturbance in cosmic harmony could have consequences for the individual as well as the state. An impious King could bring about famine, and blasphemy could bring blindness to an individual. In opposition to the right order expressed in the concept of Maat is the concept of Isfet: chaos, lies and violence.

To the Egyptian mind, Maat bound all things together in an indestructible unity: the universe, the natural world, the state, and the individual were all seen as parts of the wider order generated by Maat.

A passage in the Instruction of Ptahhotep presents Ma’at as follows:

Ma’at is good and its worth is lasting.

It has not been disturbed since the day of its creator,

whereas he who transgresses its ordinances is punished.

It lies as a path in front even of him who knows nothing.

Wrongdoing has never yet brought its venture to port.

It is true that evil may gain wealth but the strength of truth is that it lasts;

a man can say: “It was the property of my father.

There is little surviving literature that describes the practice of ancient Egyptian law. Maat was the spirit in which justice was applied rather than the detailed legalistic exposition of rules. Maat represented the normal and basic values that formed the backdrop for the application of justice that had to be carried out in the spirit of truth and fairness. From the Fifth Dynasty (c. 2510–2370 BCE) onwards, the vizier responsible for justice was called the Priest of Maat and in later periods judges wore images of Maat.

The Weighing of the Heart

In the Duat, the Egyptian underworld, the hearts of the dead were said to be weighed against her single “Feather of Ma’at”, symbolically representing the concept of Maat, in the Hall of Two Truths. This is why hearts were left in Egyptian mummies while their other organs were removed, as the heart (called “ib”) was seen as part of the Egyptian soul. If the heart was found to be lighter or equal in weight to the feather of Maat, the deceased had led a virtuous life and would go on to Aaru. Osiris came to be seen as the guardian of the gates of Aaru after he became part of the Egyptian pantheon and displaced Anubis in the Ogdoad tradition. A heart which was unworthy was devoured by the goddess Ammit and its owner condemned to remain in the Duat.

The weighing of the heart, pictured on papyrus in the Book of the Dead typically, or in tomb scenes, shows Anubis overseeing the weighing and Ammit seated awaiting the results so she could consume those who failed. The image would be the vertical heart on one flat surface of the balance scale and the vertical Shu-feather standing on the other balance scale surface. Other traditions hold that Anubis brought the soul before the posthumous Osiris who performed the weighing. While the heart was weighed the deceased recited the 42 Negative Confessions as the Assessors of Maat looked on.

The ‘Spirit of Maat’ was embodied by the chief judge in charge of the Egyptian law courts.  He had a dual role, serving as both a priest and working directly in the law courts and justice system. The “Priest of Ma’at” began court hearings whilst wearing the feather of Ma’at and all other court officials wore small golden images of the goddess as a sign of their judicial authority, also as a symbol that their judgement would be balanced and fair.  Priests drew the Feather of Ma’at on their tongues with green dye, so that the words they spoke were truth.  The priest would rule on the earthly punishment according to the nature of the law that had been broken. Punishments included imposing fines, corporal punishment and in extreme cases capital punishment.  It was considered a crime against Ma’at if a person engaged in jealousy, dishonesty, gluttony, laziness, injustice, and ungratefulness.  The guilty Egyptian was deemed to have violated the Spirit of Ma’at and would face a further judgment in the Underworld during the ceremony of justification in the Hall of the Two Truths. The ‘Spirit of Ma’at’ detailed in the wisdom literature contained practical guidance with examples and some rules applied in previous law cases. These kinds of instructional texts have been described as “Ma’at Literature”.

BELOW IS A AUDIO VERSION OF THE